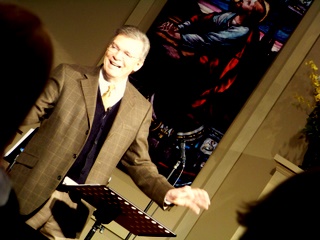 Rev. Danny Carpenter has been pastor at GRACE since 1979.

While in Cu Chi, Viet Nam during a thirteen month tour of duty, he established an interdenominational chapel service. Returning to the states, he traveled extensively for two years, speaking in churches and on campuses.

He and his wife Sandi established a church in 1973 near Dallas, Texas.

He has coauthored several books, was a writer for a publishing company, had an anecdotal newspaper column, a monthly column in a minister’s periodical, and has sold dozens of short stories and articles.

He directed and hosted a half hour Christian variety show for television.

He has trained thousands of managers and employees nationwide in the art of people skills and management and mentoring techniques through one of America’s largest seminar training companies.

He has written and continues to teach seminars on marriage and relationships.

His practical and down-to-earth style of preaching, and his wit and humor, make every Sunday service uplifting and refreshing.

This is church like you always knew it could be.

Rev. Carpenter is proudest of his two daughters and sons-in-law who are active in church ministry, and his three beautiful grandchildren, Mason, Hudson, and Grayden.

This Week at Grace