The people of Oklahoma tried to get an amendment to their constitution that would guarantee that Sharia law could never be used to overrule their own laws. In some circles, they have been ridiculed for wanting such a law. A judge has done what seems to be an increasingly popular thing in American politics: he has overruled the vote of the people and declared such a law unconstitutional.
But Oklahoma is not alone in its fear about the growing demand by many Muslims in America who for some reason seem to think that they should be allowed to rule their communities by their own laws. The Muslim communities in America are becoming more adept at using the media to spread their cause. And some are even appealing to the neighborhoods where new mosques are being 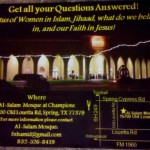 built with marketing that would look just like that of a new church in the neighborhood, and even claiming to have a “faith in Christ.”
I was shown an ad for such a mosque in Spring, TX, and the advertising appeal included the line: “Get all your questions answered: Status of women in Islam, Jihaad, what do we believe in, and our faith in Jesus!” Sounds like a new Christian church! But it isn’t. It’s a mosque, and no matter how many clever ways they may advertise, they simply do not accept that Jesus Christ is Lord, that He was the Son of God, the Messiah, our Savior. They acknowledge His existence, they speak of him as a great prophet, but they think that His disciples hid His body, and therefore there was no resurrection.
If naive Americans would watch what happens in the countries that are governed by Muslims, they might get a better sense of what’s intended. The latest example might be that of Asia Bibi, a Christian mother of five who was condemned to death in Pakistan because it was alleged by a co-laborer in the fields in which she works that she spoke out against the prophet Mohammed. 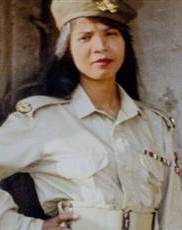 She appealed her case to President Asif Zardari, and a government minister looked into her case and said there was no evidence that she had blasphemed the prophet. It looked like she might get off in an appeal. But the Lahore High Court, perhaps fearing the president may pardon her, passed resolution preventing the president from interfering in “the commandments of Islam.”
Last Friday, the cleric of a mosque in Peshawar, Maulan Yousef Qureshi, held a rally and told his crowd, “Anyone who kills Asia will be given 500,000 rupees as a reward from” his mosque. Since there is a possibility this woman could win her case in appeal, this decades-long religious leader wants to be sure his people know that he will not allow the courts to let her live. “We expect her to be hanged,” he said, “and if she is not hanged then we will ask mujahideen and Taliban to kill her.”
I hope the judges in Oklahoma read international newspapers.