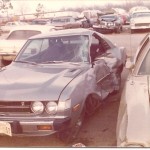 She never saw the truck coming, didn’t have time to brace for impact. In an instant she was blasted across the console of our brand new Toyota Celica, her head knocking out the passenger side window. The truck had run a red light and broadsided her. Witnesses rushed to her side and helped her. In minutes an ambulance took her to Baylor Hospital.

I was working several miles away when the company phone rang. A coworker offered me a ride to the hospital. When I arrived an hour after the accident, doctors were still digging out glass from her head and ear. She was a bloody mess. But there was a worse problem: she was seven months pregnant with our first child!
After a couple of hours waiting, one of the doctors came out and summoned me for a private meeting. “Your wife is extremely shaken,” he said, “but she should recover okay. Our real concern now is for the baby. We can’t find a heartbeat.”

“What does that mean?” I stumbled, not knowing the right questions to ask.

“It’s not uncommon,” he comforted. “Sometimes in a shock like this a baby’s heartbeat may be dramatically subdued. But usually, by now…”. He hesitated.

They kept her for observation, and I prayed long into the night that tomorrow they’d tell us the baby’s heart was beating and everything was going to be fine. But instead when I went to pick her up and take her home, the doctor told me to take her to our pediatrician right away.

After long scrutiny the pediatrician prepared us for the worst. He was holding out hope the heartbeat would return. But we should come back to him in two days. We did. Still no heartbeat. He prepared us kindly. The baby would be stillborn.

We should keep a bag packed and be ready to respond immediately at the first sign of labor. My wife’s body would naturally reject the baby, and the baby’s lifeless body would be expelled.
We continued to return to the pediatrician every few days. He was surprised that after two weeks of no heartbeat we had not had to make that emergency trip. Then it was three weeks. Then four.
The pain of losing our firstborn had weighed enormously on us. After four weeks I saw that one of my friends was preaching at a hotel in north Dallas, and I asked my wife if she wanted to go hear him. Just an excuse to get out of the house. I was surprised that she did.

When the service was over, we were among the first to slip out, hurrying through the foyer to get back home, back to bed, back to waiting. As we crossed the mezzanine, a familiar voice called out, “Danny boy!”

It was my childhood pastor, Rev. Paul Hosch. He summoned us over, smiled down at my wife’s tummy, and said, “I like to pray for all the girls in my church when they’re pregnant. I know you’re not in my church, but I just feel like I ought to pray for you. Do you mind?”
We didn’t, of course, and right there in the foyer of the hotel he prayed that my wife and baby would have a perfect birth. He didn’t know the situation. We had not been in touch with him for a long time.
We got in the car, swallowed up in our loneliness. “It was sweet of him to pray,” my wife said, looking out the side window as tears fell.

We dressed for bed. She was exhausted from her first time out of bed in a month. We hoped she hadn’t overdone it. I checked to see that the packed suitcase was still in its place.

Around two in the morning I was awakened by my wife’s screaming. Instinctively I jumped from the bed and began to pull on my clothes. She was saying, “No, no, no!” I was saying, “It’s alright. It’s okay. You’re gonna be fine!” I was dressed before I realized she was telling me to stop dressing. She was crying, but she was laughing.

“Feel!” she yelled. I saw that her hand was rubbing her tummy. I put mine there, and for the first time in four weeks, our firstborn was kicking.

A few weeks later, both mom and baby had a perfect birth!