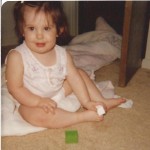 My oldest daughter was about 6 years old, playing on the floor with a church friend of the same age. My youngest, Ashley, was three. She was excluded from their game. Chutes and Ladders was too complicated for her, they thought. But she could count, and proved it to them, so they let her in.
After a few plays they called to me. “Daddy, you want to play with us?” I guessed the door had been opened to outsiders, so I left my book on the dining table and headed to the contest.

My youngest was being bratty. Every time she would climb a ladder, she’d chant in a sing-song, “Na na nuh na na, I’m gonna win.” The others rolled their eyes.
Chutes and Ladders is a tricky game. In just a few spins, the little taunter hit a couple of slides and fell back, and Daddy hit a couple of ladders. And just like that, I won the game.

Without thinking, I chanted in her sing-song, “Na na nuh na na, I won the game!” And suddenly, without warning, she exploded in rage, jumped to her tiny feet, and yelled, “Well I coulda won if it hadna been for my stoopid daddy!” And then she turned and ran to her room.

The three of us were shocked. I didn’t know what to do. Meekly I whispered to the two girls, “Keep playing. I’m going to sit out for a while.” And then I went back to the table and my book.
Quite simply, I didn’t know how to respond. She’d never called me stupid. I had not seen that kind of rage in her. I felt partly guilty because I goaded her, but she had been doing the same. I imagined what my father might have done to me if I had ever called him stupid. But I elected to just keep reading my book.

After a while, I was aware of timid little steps behind my chair. I sensed her. She didn’t speak. Momentarily I turned around to face her. Her little body was in complete surrender. Her arms hung limp at her chubby little sides, her head hung down. She wouldn’t look up. She knew she was in for it, and she had come meekly to get it.
“Do you want something?” I asked. She never looked up.

I opened my knees and pulled her into my chest and just hugged her. The other little girls were watching. I whispered in her ear, “It’s okay. I’m sorry, too. I shouldn’t have teased you.” And then we just hugged for while. After moments, I said, “We gonna be okay?”

“Want to go back and play?”

“Uh huh.”
So I let her go. As she turned, heart all healed, tension all gone, I reached toward her and caught her attention. She froze for second. “Hey,” I whispered, “You don’t really think I’m stoopid, do you?”
Her face screwed up for a second, and then, “Sometimes!” And she was gone. Before I could backhand her across the room, she was playing again.

I spun back around to the table and laid my head in the crook of my arm. I was having a moment, and I needed to have it privately.

JUST PRAY!Back From the Dead, and Not Yet Born
Scroll to top