Perhaps my Shih Tzu is typical of the breed. Since I’ve only had the one, I don’t know for sure. I have nothing to compare her to.

When I acquired her a few years ago, they told me she was a lap dog. Not sure what that’s supposed to mean. She does not lay in anyone’s lap. When my wife has a blanket over her legs, the dog will lay on the blanket beside her leg. Not on her lap.

I’ve tried, plenty of times, to scoop her up in my arms and just cuddle her. Nope. She’ll stay for all of fifteen seconds, then she’s squirming to hit the floor. So much for a lap dog.

She’s an independent lady. She needs me to put water and food on the floor for her. She needs me to open the back door for her to go relieve herself, or to sit in the sun, or to chase away the squirrels and pretend she’s the guardian of the house for a few minutes. But other than that, she doesn’t need me.

When the first rumble of thunder hits, she is a different dog. She comes running! She will jump up in my arms and tremble until I wrap her up and hold her against my chest. And, amazingly, she can lie quiet and still for thirty minutes. She’s so helpless and gentle when it thunders. She lays her head in the crook of my arm, and for a while it feels like love. But, I kid you not, if the thunder ceases for any length of time, she comes alive and twitches out of my arms and hits the floor. Independent again. Needs nobody!

I ponder the possibility that my relationship with God mirrors the one I have with my Shih Tzu. I’m terribly independent. I need very little attention.

The church was robbed.  It’s the third time in a couple of years or so.  It wasn’t bad this time.  They just stole underground copper wiring, about $3,800 worth.  We lost the use of our youth building for a week.  We’ll replace it this week, and move on.

It gives you pause, wondering what kind of person steals from a church.  I guess it shouldn’t be any different than stealing from an individual, but it seems worse, somehow.  Churches aren’t rich. They spend everything they bring in.  Our small church has only around 200 people coming to it, and we gave over $23,000 last year in benevolent gifts.  Throw in another $10,000 for missions and volunteer staff food and gifts, and we look pretty generous.  We give. It’s the heart of a church.

So to be robbed seems such an unnecessary violation.  The thieves would have to take the copper to a reclamation site, and that business would know that they didn’t come by that copper wire honestly, so they would only offer them pennies on the dollar.  They might have made $300!  Who knows?  I guess for 20 minutes’ work, that’s not bad.  But if they had just come to the church and told us they were destitute, they might have gotten more than that, and they wouldn’t have had to steal it.

I mused about such things last week, and then chuckled to God about the nature of a thief.  I sensed God whispering back to me, with a smile, “Nothing to do but forgive and move on.  I do it all the time.”

“You do?”  I was genuinely incredulous.

I should have seen that one coming.  But I bit. “Seriously?”

And then I turned the pages and read the account again.  “Will a man rob God? Yet you are robbing me. But you say, ‘How have we robbed you?’ In your tithes and contributions.  You are cursed with a curse, for you are robbing me, the whole nation of you.”  It’s in the Old Testament book of Malachi, 3rd chapter, verses 8 and 9.

Well, some folks were pretty high and mighty about what they’d do to those thieves if they caught them. “Low-life punks!” snarled one.  “I’d like to get my hands on them,” growled another.  I sure hope they’re contributing to their church.  It would seem pretty hypocritical if they’re not.

But then I thought, wait! We’re not under the Old Testament Mosaic law.  So is anyone really robbing God that way these days?  And, of course, Paul’s words came ringing:  ” The point is this: whoever sows sparingly will also reap sparingly, and whoever sows bountifully will also reap bountifully.  Each one must give as he has decided in his heart, not reluctantly or under compulsion, for God loves a cheerful giver” (2 Corinthians 9:6-7).  And there it is, plain as day!  God loves a giver.  Oh, yes, it says “cheerful” giver.  But you can’t miss the “giver” part of it.  Makes you wonder what He thinks about non-givers, doesn’t it?

At any rate, the church was robbed this week.  I hope it was only copper wire that was stolen.  But you never know.  There’s all kinds of thieves.

I never thought I’d say this, but I was a little sorry to see the Christmas tree come down.  That single act seems to signify that Christmas is officially over.  It’s time to get back to work, move on.  But this Christmas was warm and comfortable, and I hate to see it go.

For the last four years or so, my family has opted out of the exchanging of presents.  That’s harder than you might think, especially when you have grandkids. We have chosen instead to take a trip, to do something that hopefully creates a memory that might last a lifetime.

We’ve been skiing a few times in New Mexico, and, indeed, still talk about the awesome snow storms, the dog that we thought was a wolf, the frozen water pipes that forced us to change rooms in the middle of the night, and every other unique event.  And we’ve loved every memory.

This year we took a trip to Grapevine, a little town which bills itself as “the Christmas Capital of Texas.”  It was a good trip. The town has a great light show around a gazebo right in town, and a great little historic cabin and courtyard all decorated in a way that provides hundreds of photo ops.

Then we spent a day at the Gaylord Texan’s Ice show.  It, too, gave us some great photo spots, and it is quite a spectacular achievement.  Thank goodness they provide you with parkas to wear in the 12 degree rooms.  The final scene,  lifesize ice sculptures of the nativity scene, is unbelievably beautiful!

The third day we packed up and drove to east Texas to another hotel.  We uncrated a PA system and rehearsed a little “show” of Christmas carols and other songs which we were going to perform at the nursing home where my mom resides.  This would be our first “working” Christmas Eve.  No cozy gathering at home. No sitting around the Christmas tree and enjoying family games.  Just singing to a bunch of people who may or may not know you’re there.

My mother has Alzheimers.  Her memory lasts about a minute, and sometimes not that long.  I have to remind her who I am, and in that moment her face brightens and she is excited.  Then, a minute later she will ask me who I am.  So we put on our little show knowing that my mother would not even remember we were there by the time we drove out of the parking lot.

I was a little reluctant to even suggest this kind of Christmas to my family.  I don’t know why.  They jumped on the idea so quickly, I was caught without a real plan.   We mentioned it to a few people, and got some ideas.  Judy Kingan made us a pile of cookies, and the staff who had to work on Christmas Eve had wolfed down half of them before we left.  The grandkids made a card for all 102 residents in the home, and handed one to each resident who came to our little show.

My granddaughter plays guitar and sings in our church youth band, but my grandson doesn’t put himself behind a microphone.  Yet at the nursing home, he grabbed a mike and stepped out front and sang every song!   My mother sat near us, and I was doubtful that she actually remembered who we were.  But during one song she motioned one of my sons-in-law over to her, and he leaned down and heard her say proudly, “That’s my son up there.” Amazing that she remembered.

After our little show, everyone had to be wheeled back to their rooms.  It was 6:50, past bedtime for most of them.  Mom stayed and visited with us for another 30 minutes.   Of course, we had to keep introducing ourselves.  But she was in fine form, and funny as ever.  I was glad my grandkids got to see just a glimpse of the woman she used to be.

“How long have you had that cough?” I asked after a spasm of coughing hit her.   “Well,” she grinned, “at least for two or three minutes.”   Well said from a woman who apparently knows she has a memory problem.

It’s funny how the memory works in someone who has lost it.  She still remembers clearly that she has four children, and can remember all our names.  Yet doesn’t realize that the one sitting beside her is one of those kids.  And yet, when she speaks of them, she says, “I had four children, you know.  And they loved me.  They were always so good to me.”   I am grateful that her memory recalls us that way.

She said to my daughter, “There are days that I just want to quit.  I don’t know why I’m still here.  And then, someone will come by and visit, or just say the right thing to me, and I want to live again. I want to go on.  You know, I just think God puts some people here just for that, just to keep us going.”   Maybe that’s why she’s still here.  She gives me inspiration.

Late Christmas Eve we’re trying to find anything open in a small Texas town, and we find a not-so-clean fried chicken joint.  And a convenience store for those who didn’t want fried chicken.  And we carried our treasure back to our tiny hotel room and feasted and played games and talked and cried.  And expressed our thanks to each other and to God.

I don’t even have words to express my personal thanks and love to my kids and grandkids for being the troupers that they are, and for genuinely giving up Christmas as usual.  We found Christmas extraordinaire!  And I hate to see it go. 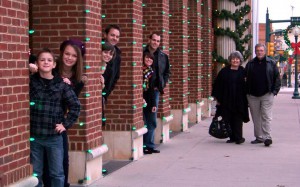